Print edition of Malahat Review Issue 72 (Fall 1985). This issue is not available for online purchase due to low stock. Please contact The Malahat Review at malahat@uvic.ca or 250-721-8524 for more information.

Long before Rohinton Mistry earned international accolades by winning the Governor General’s Award, Commonwealth Writers Prize, Giller Prize, and making the Booker Prize shortlist, he was submitting stories to literary magazines like ours. This issue—which hails from the time when the Malahat editorial board featured the A-list likes of Jack Hodgins, Marilyn Bowering, P. K. Page, Stephen Scobie, and Patricia Young—features Mistry’s short story “The Collectors,” as well as three poems by Don McKay, six poems by Sharon Thesen, and 20 pages of poetic old-west action by Paulette Jiles, whose “Desperadoes: Missouri 1861-1882 (or the James Gang and their Relations)” offers snippets and vignettes of an outlaw’s life as told from multiple viewpoints—including not only Jesse and Frank James, but also their mother Zerelda and various bandits’ wives.

Also of note is Scobie’s charming review of Umberto Eco’s Postscript to The Name of the Rose (Harcourt Brace Jovanovich, 1984), which notes: “Rip-off time in semiotic circles. For just $8.95 (American), you too can buy this tiny book, dressed up in hard cover, with eleven indifferently reproduced black-and-white illustrations, in which Umberto Eco tells us next to nothing about the writing of his novel, The Name of the Rose. ‘A narrator should not supply interpretations of his work,’ he announces early on; and indeed he doesn’t.” 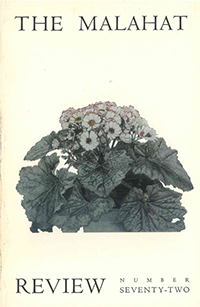