In July 1983 a song by the Police called “Every Breath You Take” was at the top of the charts, Martina Navratilova won the women’s final at Wimbledon, Pierre Elliott Trudeau was our prime minister again, and one epoch in the life of The Malahat Review drew to a close while another began. Issue 65 is the first issue edited by Constance Rooke (1942 – 2008) who took over from Malahat co-founder, Robin Skelton (1925 – 1997). In her introductory comment, Rooke announces her intention to make Malahat “more distinctly a Canadian literary magazine.” So with issue 65, the subtitle, ‘An International Magazine of Life and Letters’ was removed from the masthead.

Under Skelton’s fine guidance, the magazine was already publishing excellent Canadian writing, but CanLit was just beginning to hit its stride. An exam question in the undergraduate Canadian Literature course I was taking then was, “Canadian Literature – is there such a thing? Explain.” In the next decade, The Malahat Review helped along the careers of Canadian writers who began to be recognized on the world stage.

In this issue, the riches include a short story by Carol Shields. “Accidents” takes us to the coast of France where a small, innocent gesture leads characters to a haunting encounter in a hospital ward. Also here is “Twins” by the wildly inventive Eric McCormack who works in a kind of postmodern, post-realist style that is all his own. This story charts the life of Malachi who has either an affliction or a gift which causes him to simultaneously speak opposed sentiments out of each side of his mouth. Keath Fraser’s short story, “The Emerald City” is a brilliant examination of a love triangle.

Among other fiction in the issue are two stories by Gordon Lish, best known (by me, anyway) as Raymond Carver’s editor. Lish here puts his literary chops where his blue pencil is.

I was pleased to discover in issue 65 a poem by and an interview with Kay Boyle, an American writer and political activist who was among the famous group of expatriate writers in France in the 1920s and 30s rubbing elbows with Gertrude Stein, James Joyce, and others.

There are seven poems by Gail Harris, poems by E.D. Blodgett, Mark DeFoe, and Steven Mayoff. The first selection in the table of contents is a group of Phyllis Webb’s “anti-ghazals” — a form Webb explored extensively through the 1980s. A handful of Douglas Barbour’s “breath ghazals” neatly bookend the issue. 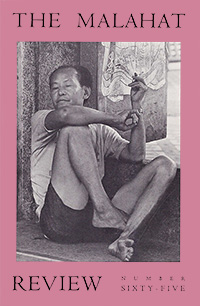