Print edition of Malahat Review Issue 76 (Fall 1986). This issue is not available for online purchase due to low stock. Please contact The Malahat Review at malahat@uvic.ca or 250-721-8524 for more information.

What’s not to love in an issue that features a cover photo by no less than Michael Ondaatje? Bet he stopped submitting those after The English Patient propelled him to literary superstardom six years later. Still, his presence on the cover—if not the actual pages—heralds a strong issue, including a selection from bpNichol’s Organ Music, which later won honourable mention in the National Magazine Award’s poetry category. (Note: that’s “organ” as in body, not the instrument. “I almost got to meet my thyroid,” he writes. “I had been to see the Doctor and the Doctor said well it looked like my thyroid was enlarged and really i should get a thyroid scan and before you could say goiter there i was in this tiny room strapped down under this big machine and the technician was saying not to worry because nothing bad was going to happen, i only had to lie there as still as possible for fifteen minutes or so and then i could get up and leave.”)

Also appearing in these pages is Keath Fraser’s NMA fiction winner “Bones,”and Paulette Jiles’ “Sitting in the Club Car Drinking Rum and Karma-Cola”—a great 25 pager about crossing Canada by train, as split into scenes like a film script (“Opening scene,” “Minor characters,” “Flashback: the Background”)—which would earn the writer an NMA silver for fiction. Anyone who has ever made the cross-Canada journey will love—and appreciate—her description of travelling around the north shore of Lake Superior: “The nature of absolute truth is that it is too boring to endure without a frontal lobotomy, and there is for most of us no virtue in it.”
My copy of this issue also included a typed gift-subscription teaser from editor Rooke: “Our December issue will be out just in time for the holidays, so that your friend will have that palpable evidence of your gift right away”—which itself included the bonus offer of a signed broadsheet of P. K. Page’s “Deaf-Mute in the Pear Tree” (“which is better,” wrote Rooke, “if somewhat less seasonal, than a partridge.”) 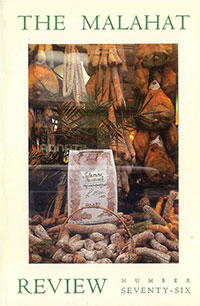