Print edition of Malahat Review Issue 75 (Summer 1986). This issue is not available for online purchase due to low stock. Please contact The Malahat Review at malahat@uvic.ca or 250-721-8524 for more information.

The beautiful cover photograph by noted poet Patricia Young is titled “Cousins,” and while it probably would ruffle feathers if published these days it nevertheless captures an innocence and wonder that can’t help but bring a smile. The inside pages of this issue will do the same, with a rich variety of voices.

There are arresting poems here by authors we still turn to today, including Heather Spears, John Pass, Margaret Atwood, and Susan Glickman, but for me it is the fiction that stands out, each piece complete unto itself, yet curiously linked thematically. I expect this was more a “happy accident” than any conscious choice by the editors, but the result is exceptionally satisfying for readers.

Indeed, the opening story, “First Flames” by Trevor Ferguson picks up on the innocence of the cover photo, although in this case it is, perhaps, more a loss of innocence. The narrator recounts a first “puppy love” for a girl in his grade-three class whose father has died. Hearing that she is now “deprived” causes him to realize that he, too, is deprived, living with “two mothers” – and a menagerie of exotic birds and snakes – but no father. He is shown, briefly, a photograph of the absent father only to have his mother burn the photo in front of him. “Smoke lingered at the level of the adult heads. A cloud above me, the scent of charred skin. ‘Your father isn’t dead, Kyle,’ my mother repeated. Her eyes, looking down upon me, calm aquamarine. ‘He simply does not exist.’”

The images of fire and ash and the loss of a father are picked up again in “Delaware,” a heartbreaking story by American author Yannick Murphy. Haunted by having accidentally transported some of her dead father’s ashes on her shoe, she also imagines that the bones of an adjacent graveyard are forming into hands below the surface of the river where she swims. While admitting it’s crazy, it also leads her to memories of her father that point towards healing. “I think he knew all along that he would end up on my shoe. I think that his last wish, really, was not to have his ashes thrown off a cliff, but his last wish was to be on my shoe for a day.” The story “Yellow Light,” by Tereze Glück also concerns the parent/child theme, this time a daughter must act as guardian of a mother “recovering” at the seaside. The colourful mother obviously has emotional and mental issues, but the daughter is besotted and willing to be there for her. “That day, and every day before it, and after, we seduced one another, until, by evening , in the clearer light of dusk, we were back together again, one body, one skin.”

“Maya,” by Mary Swan, is the story of an adolescent girl left to find her way on a kibbutz while her recently re-married mother honeymoons in America. Unable to handle most tasks, the girl finds she is suited to caring for a handicapped and bitter young woman no one else can tolerate. The enigmatic ending, upon the mother’s return, suggests that Maya is no longer the pliant, helpless girl she was.

The five-page masterpiece, “What Norah Knew,” by Emory Davis not only continues the parent/child theme, (another third-grade child, another disturbed mother), it echoes the suggestion of danger in deep waters. During a day at the seaside, Norah’s mother, drunk and despondent after the departure of Norah’s father some ten months earlier, fills her pockets with rocks and prepares to drown herself, wading out and disappearing under the water. Seemingly oblivious to her daughter’s distress, she surfaces again, but this is no happy ending. Delicate, yet wrenching, this is a brave look at mental illness. 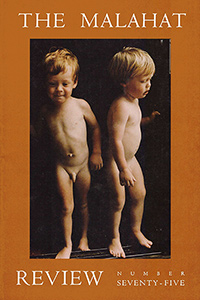