Print edition of Malahat Review Issue 74 (Spring 1986). This issue is not available for online purchase due to low stock. Please contact The Malahat Review at malahat@uvic.ca or 250-721-8524 for more information.

The 1986 Issue 74 opens with a contemporary 2015 topic – transgenderism. “Christina/Philippe” is a two hander by Per Brask, who trained as a Dramaturg in Denmark before immigrating to Canada. The play explores the conversations that might have taken place had two historical figures been able to meet and discuss their sexual identities.  In “Hagar,” Pauline Holdstock takes us even further back in history with the biblical tale of Sarah and Abraham, their servant Hagar and her son Ishmael. This piece is in the first-person from Hagar’s viewpoint; with depth and pathos, it personalizes the simple framework of the bible story.

Susan Musgrave’s three poems are incisively honest “I like truth in a man. I like you in spite of it.” She dedicates “Imagine” to Patrick Lane “. . . poetry gets you nowhere faster than anything.” Lane, who was shortlisted in 2015 for the Governor General’s Award, also has three poems in this issue.

“An Angel”is Margaret Atwood’s darkly humorous short take on the suicide angel; on the other hand, the Argentinian/Spaniard Norberto Luis Romero plunges into a far blacker world with his story “Snipers.” Romero details the precision of gun violence as if it were a fine art, with no raison d’être.

“Psyche” by American Jascha Kessler takes us behind the façade of beauty when a woman realizes her perfect romance may be no deeper than the products she so successfully markets.

Five women photographers are featured, presenting eight evocative photographs – all of women and each a story in itself.   There are eighteen book reviews, including one of Robertson Davies’ latest release, What’s Bred in the Bone.  Reviewer Constance Rooke makes no bones about Davies’ ego interfering with his literary technique and details the similarities of this book to Fifth Business, but she does manage to slip in faint praise about his story-telling gifts.

Robert Kroetsch’s (1927-2011) “Advice to My Friends” (1985) was considered the second part of his long poem “Field Notes” (1981); both poems were included later in Completed Field Notes: The Long Poems of Robert Kroetsch.  As Kroetsch stretched the boundaries of traditional poetry, reviewer Douglas Barbour helps out with an explanation on the challenges of reading a “continuing” or “life-lost” poem. 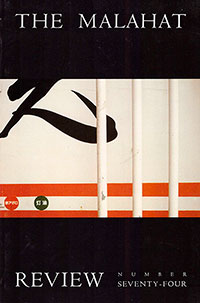