The eclecticism of Constance Rooke’s second issue as editor maps a transition in focus. Alongside the European writers in translation and the critical articles that Robin Skelton had no doubt recruited before he stepped down, readers encountered six poems by Patricia Young and a short story by Terry Griggs. Michael Ondaatje also appears as a triple threat with a poem called “Red Accordion,” a photograph inside of Christopher Dewdney, and an untitled cover photograph.

The issue’s two quasi-focuses also illustrate the sea change from Skelton’s internationalism to Rooke’s emphasis on contemporary Canadian writing. The first on Ezra Pound begins with “Ezra Pound, Sappho, and My Assault on Mount Helicon,” a memoir in which Mary Barnard recounts translating the ancient Greek poet twenty years after Pound had encouraged her to do so. In “‘I Like to Get Letters’—Ezra Pound and a Canadian Correspondent,” R. T. K. Symington documents Pound’s eight-year correspondence with Else Seel, a German writer and translator living in the B.C. interior, while he was incarcerated in St. Elizabeth’s Hospital in Washington, D.C. Anthony Kerrigan’s translation (or “adaptation”) of an elegy for Pound by Italian poet Antonia Colinas acts as a coda. The issue’s second focus is comprised of four poems by Christopher Dewdney, and Stan Dragland’s expansive and illuminating “Christopher Dewdney’s Writing: Beyond Science and Madness,” also the afterword to Dewdney’s selected poems, Predators of the Adoration, which was published that fall.

A brief obituary for John Peter further marks the transition from the Skelton to the Rooke years. A colleague of both editors, Peter, who taught English at the University of Victoria, helped convince the president and board of governors that establishing an important literary journal was a contribution that the university must make. As Skelton acknowledges, Peter was “certainly the man without whom The Malahat Review could not have existed, and could not have achieved the position in the world of letters it now holds.” How Rooke would reorient this legacy only the issues ahead could substantiate. 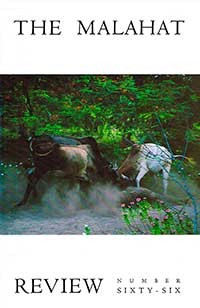