Issue 67 of The Malahat Review, published in early 1984, has famed Canadian poet P. K. Page all over it. From her painting, which graces the cover, to a collection of eight poems at the front of the book, the issue finishes up with a fun word game she supplies for the inside back cover, transforming the names of prominent Canadian literary figures into lighthearted fancy. To wit:

With such delightful attention to both form and feeling, it’s no wonder that one of the poems from Page’s contribution, “Deaf-Mute in the Pear Tree,” won a National Magazine Award (Gold) in 1985.

But consider, too, that Page had already been a well-established figure in the literary world by 1984, against the odds of attention given to women in literature. It’s hard to not be reminded of this when two of the books reviewed in this issue – Atwood’s Bluebeard’s Egg and the collected volume Confirmation edited by Amiri and Amina Baraka – are still doing the heavy lifting of calling attention to the contributions of women in literature. And Page, who by 1954 had already won a Governor General’s Award for Literature, had both led the path and continued to walk its literary lengths. 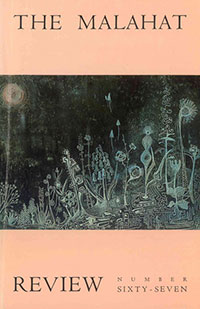