Print edition of Malahat Review Issue 4 (October 1967). This issue is not available for online purchase due to low stock. Please contact The Malahat Review at malahat@uvic.ca or 250-721-8524 for more information.

Issue #4 is full of translations and has a Latin-American edge. Lysander Kemp translates the works of three Mexican poets, including Octavio Paz, while William Stafford and Herbert Baird translate the works of three Spanish poets. Daniel Cosio Villegas discusses the still-timely topic of the relationship between the United States and Cuba in an essay entitled “The United States and Cuba: A Latin-American View.”

Other translations include a short story and a play.  “Janos and Macko,” written by Veljko Petrovic, of the former Yugoslavia, and translated by Svetozar Koljevic, tells the story of a man looking to be forgotten by working in a monastery. Unfortunately, the opposite happens when everyone in the monastery begin to harass him and his only friend, a donkey named Macko. “Insurance Against Suicide (The Immortal)” is a play by Yvan Goll and translated by Clinton J. Atkinson and Arthur S. Wensinger.  It’s a wild ride that exemplifies the term “superdrama,” which is introduced in the foreword.

Robin Skelton, one of The Malahat Review’s founding editors, appears twice in this issue, first with an appreciative look at the sketchbook of Belgian artist Paul Delvaux, complete with twelve black and white plates from the sketchbook.  The cover  is also one of these beautiful sketches. The second work by Skelton is a review of James Dickey’s Poems 1957-1967.

In other works, G. Wilson Knight’s essay compares John Webster’s play “The Duchess of Malfi” to other works such as Faustus and King Lear. Stanley Kunitz, an American poet, contributes “Two Poems from the Italian of Giuseppe Ungaretti.”  In “Worksheets,” the U.S. poet Robert Francis gives us an eight-part poem, the first seven parts being the working drafts that lead to the final, exquisite little poem called “The Hawk.” 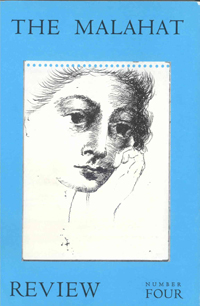