Print edition of Malahat Review Issue 5 (January 1968). This issue is SOLD OUT.

The fifth issue of the Review features a few big names from the Canadian literary scene among its twelve contributors from half a dozen countries, most notably early work from Susan Musgrave, whose poem, “Exposure,” was written when she was only seventeen. Also appearing in the pages is George Woodcock, who contributes “The Deepening Solitude: Notes on the Rebel in Literature,” an essay examining some of the more lingering rebels that have appeared in literature from Milton’s Satan in Paradise Lost to Orwell’s Winston Smith in 1984. This is a taste of the subject matter Woodcock had developed in his Governor General’s Award-winning book, The Crystal Spirit (1966) about his good friend, Orwell. Finally, George Bowering, Canada’s first Parliamentary Poet Laureate (from 2002 to 2004) and author of more than 100 books, offers Malahat readers a poem, “Sekhemab & Perabsen.” The issue’s coveris a drawing by John Singer Sargent, which is in the Corcoran Gallery in Washington, D.C; inside the issue there are also twelve plates of his drawings. Skelton closes issue 5 with his signature thumbnail reviews of new books of poetry, fiction, drama, biography, and criticism from around the world. 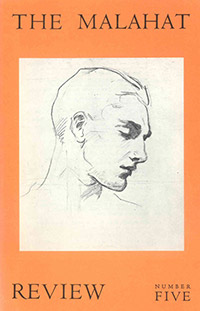