Print edition of Malahat Review Issue 3 (July 1967). This issue is not available for online purchase due to low stock. Please contact The Malahat Review at malahat@uvic.ca or 250-721-8524 for more information.

The essays in this issue range from Pop Art to antiquated English Ballads. Allan Kaprow explores the art of the 1960s in his fascinating essay, “Pop Art: Past, Present and Future.”  Kaprow discusses the influence of Pop Art and suggests some direction for the movement. Decades later, this essay and the accompanying artwork retain their relevancy as the role of art in society is constantly being analyzed. David Buchan introduces us to a European ballad in his essay entitled, “The Maid, the Palmer, and the Cruel Mother.”

Bonamy Dobree collects Thomas Hardy’s poetry in the essay, “The Poems of Thomas Hardy.” Although Hardy is best known for his novels, he considered himself a poet.  Dobree’s essay is an excellent introduction and tribute to this famed Victorian writer.

In the fiction department, Barbara Jump’s short story, “Babes in the Woods” is witty, heartfelt and captures the awkward stumbling that often follows the death of a loved one. Michael Hamburger translates Gunter Eich’s radio play, “The Rolling Sea at Setubal” from the German so readers can enjoy the enigmatic story of Dona Catarina, a banished lady in search of her lost love, the poet Camoes.

Familiar names tucked within this issue include John Newlove, a Canadian poet known for his prairie poems; “The Engine and the Sea” reminds us of the importance of the railway industry in Canadian history.  Another well-known contributor is George Woodcock, a Canadian critic, who offers his opinion on The Continent of Circe by Nirad Chaudhuri.

In poetry, Thomas Kinsella illustrates the process of writing and editing poetry in his piece called “Worksheets.”  This visual piece shows us the beginning, middle and end of Kinsella’s creative process with the final version of the poem, “Mirror in February,” presented at the end of the sequence.  Other notable poetry contributors are Glyn Hughes, James K. Baxter, and Norman Nicholson. 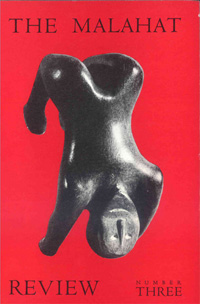